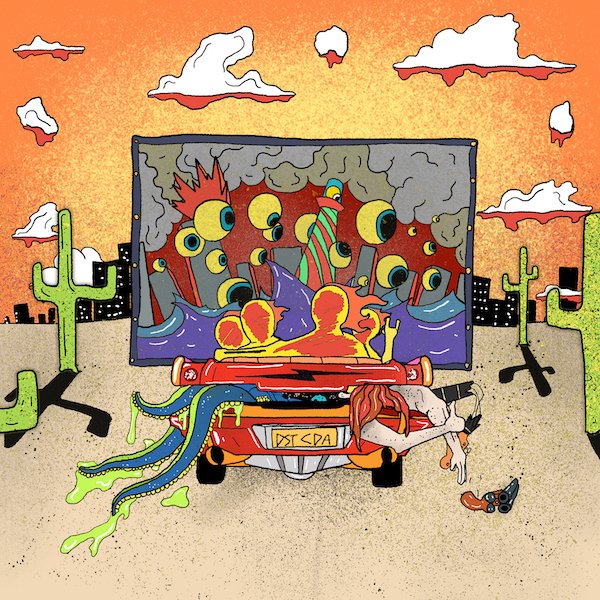 The Dust Coda are thrilled to release their third single Jimmy 2 Times. The single is accompanied by an incredible video.
Jimmy 2 Times video sees none other than British award-winning powerhouse Andrew Morahan as executive producer and it was directed by his prodigy Josh Trigg.
The executive producer Andrew Morahan, also known for his iconic work with Guns N Roses, George Michael, Aerosmith, Bon Jovi, Michael Jackson, Paul McCartney, to name a few, comments: "A classic video for a classic rock band. I have worked with a few and The Dust Coda are right up there with the best of them."

Director Josh Trigg continues: "We wanted to create a gnarly narrative for a gnarly track. I aimed to create a film with deep tones and grungy characters with a 'Good Fellas' style underground illegal dice game all set on an abandoned cargo ship. The track perfectly embodies a character that gambles not just on a dice game but on his life and we wanted to portray that in a hardcore yet fun way and held up by an explosive performance from John Drake and crew."

Jimmy 2 Times crosses the genre defining boundaries of rock to create a unique soundscape, making the perfect setting for the outstanding video that accompanies the single. The Dust Coda draw inspiration from a kaleidoscopic variety of influences and manage to weave each one into the fabric of the track; the result is a captivating and infectious number in which the rock drive meets the bluesy undertones and vague pop fluidity reminiscences.

On working with Andrew Morahan and the video, the band comments: ""J2T is a tune about a fictional gangster, a sinister trickster, the Artful Dodger all grown up. The name of the song is lifted from one of the cameo characters in the classic Martin Scorsese film 'Good Fellas'. The video itself pays homage to the classic gangster flicks coming out of America in the 80's and 90's but with a modern British twist. Andy Morahan, Josh Trigg and the rest of the guys at Geronimo Boy totally got the vibe of the song and constructed this gangster rock n roll paradise aboard a ship on the docks of the Thames in the freezing winter. It was a hell of a shoot, minus 2 degrees below deck but there was plenty of Whiskey to go around."

The Dust Coda's forthcoming album Mojo Skyline was recorded at Modern World Studios with the multi-platinum, award-winning producer Clint Murphy (Manic Street Preachers, Thunder, Devilskin), and offers a plenitude of tracks that leap across the spectrum of rock'n'roll, containing half a decade's worth of the band's raw soul and innermost demons. Sleek yet hard-hitting rock'n'roll rooted in blues soul, the band clutches the echoes of the genre's most beloved household names, from the pure, raw poetry of Led Zeppelin to the nasty muscle of Guns 'N Roses, and bring them kicking and screaming into the 21st Century.
Mojo Skyline will be released via genre-defining independent label Earache Records (also home to The Temperance Movement, Massive Wagons, Blackberry Smoke). Label founder Digby Pearson comments: "Earache Records can't wait to be working with these frontrunners in the New Wave of Classic Rock and turn heads in the rock community and beyond with Mojo Skyline, which we're certain will become renowned as a modern rock classic."