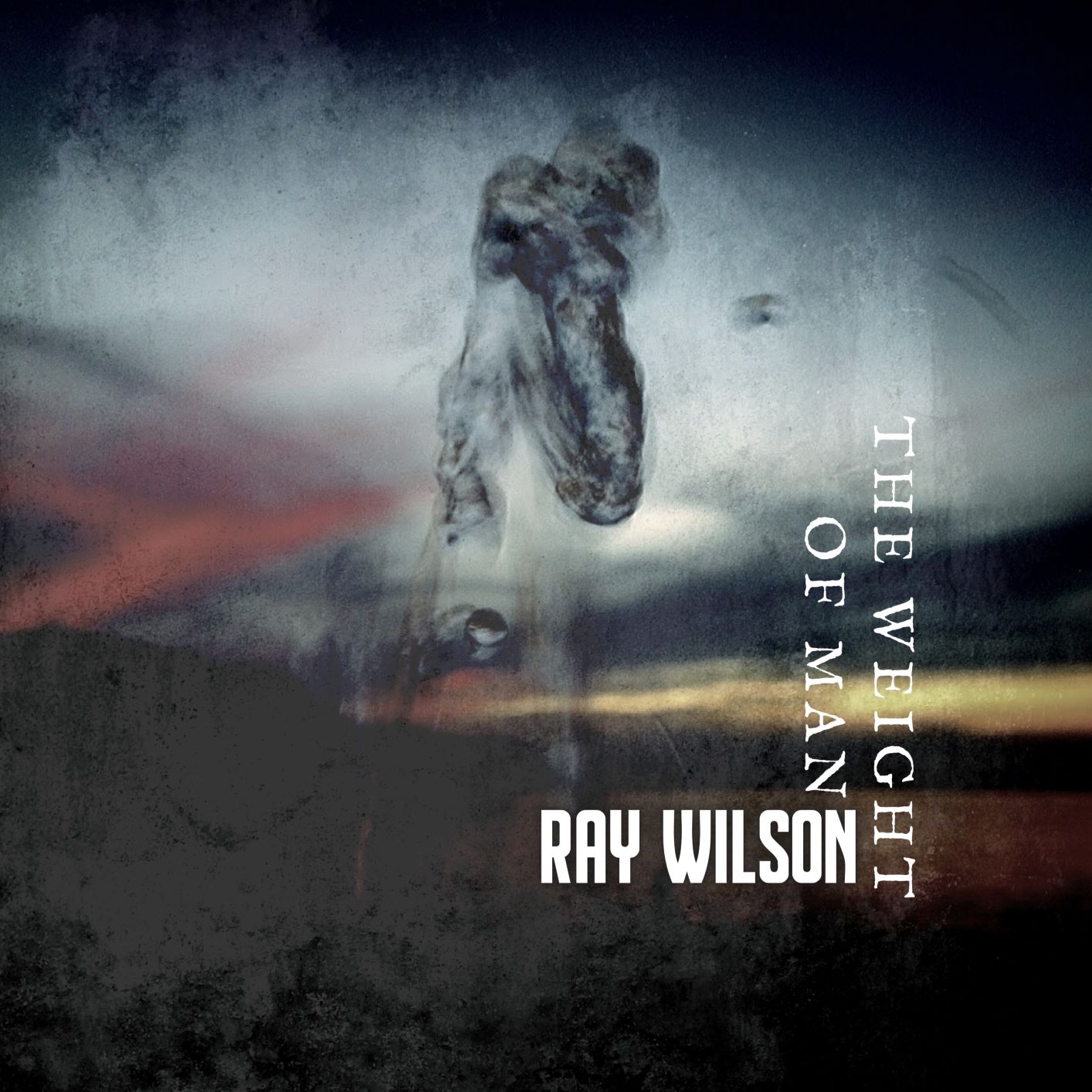 Ray Wilson - A Weight Of Man

It was 1997 when Ray Wilson sang, co-wrote, and recorded the last Genesis studio album "Calling All Stations". The album reached Number 2 in both the German and UK Charts selling over 3 million copies in Europe, and was supported by a 46 date European Tour, which culminated in two headliner shows at Rock in Park and Rock am Ring.
Prior to Genesis, Ray had enjoyed great success with his band Stiltskin, reaching Number 1 in the UK and MTV European Charts with the song "Inside" and also his band Cut_ who had participated in sold out stadium tours with Rock Legends The Scorpions and Westernhagen.

Ray's solo career started in 2002, performing 12 sold out acoustic shows at Edin-burgh International Festival, where he also performed songs from his debut solo al-bum, "Change", released worldwide in 2003: this was the beginning of a gradual success and a very satisfying career for Ray, as he was also able to keep control of his own destiny, slowly building his name by playing thousands of concerts and pro-ducing regular studio releases, year on year.
Since 2002, constantly touring - often playing more than 150 gigs per year - and af-ter many collaborations with incredible artists of every kind of genre, from rock to prog and techno, including Armin van Buuren, Steve Hackett, Turntablerocker, RPWL, Scorpions and Patrycja Markowska, Ray has released 8 studio albums both as a solo artist and with the reformed Stiltskin, 10 live albums (taken from his acou-stic shows, full band concerts, and the Genesis Classic project) and 2 retrospective collections: a box set containing all the studio albums and "Upon My Life", the first official best of released in 2019.

5 years after his last two studio albums, the acclaimed "Song For A Friend" and "Makes Me Think Of Home" both released in 2016, Ray Wilson breaks the silence and returns with "The Weight Of Man", his new album comprising 10 new songs plus an astonishing Lennon/McCartney penned track - the first time ever he covers The Beatles, that could be objectively considered as his best album to date. An incre-dible journey through music, life and the complex times we're living.
"The Weight Of Man", not only shows the weight of Ray's musical knowledge, but his different influences, compositional maturity, interpretation and performing tal-ent. It's mainly his artistic response and poetic snapshot, to the hardest moment of our lives, where the Covid-19 pandemic put at risk something so important and un-touchable like music, and the way we trust in one of the most complete art forms we have on Earth. The lyrics and the sounds on this album have never been so powerful and accurate. If we can say science is the only way we must follow to reach a cure for everyone, it's also true music is the highest form of empathy: where vaccines are finally treating lives, music is the constant medicine that takes care of our souls. That's why "The Weight Of Man" is empathy and soul, emotion and realisation, ex-perience and the thrill of disappointments or dreams, comprehension and hope: and mostly,"The Weight Of Man" is the weight of us all. As human beings, as teachers for our kids and the world we'll deliver to them, as the potential of a better present and future, as a global community.

From the musical point of view, "The Weight Of Man" is the perfect crossroad of the versatility Ray has achieved in his multi-chromatic artistic journey: from the ex-perimental landscapes and night-dye moods of the opening single "You Could Have Been Someone" to the proggy-taste we find here and there in complex tracks like "The Last Laugh" or the title-track. From the powerful innovation of "Amelia" (one of the most intriguing songs) to the radio-friendly chorus of "Almost Famous", the fourth single taken from the album. A rollercoaster of tunes, that properly sets the perfect surface for Ray's ability in telling stories and empathising with characters: the listener who could have been the singer ("You Could Have Been Someone"), Ray who is everyone of us watching the world stopping outside the window ("Mother Earth"), the younger version of us we lost with its truth ("We Knew The Truth On-ce"), the rockstar who's hoping to not lose contact with his audience because we're all the same, on and off the stage ("I, Like You"), the human being giving weight to superficiality and becoming the heaviest load for the world ("The Last Laugh", "The Weight Of Man"), the lonely soul trying to find a new place with a new friend and new ideas ("Symptomatic"), the girl dreaming to be a queen while finding her way ("Almost Famous"), a middle-age man who starts to believe in himself and finds the new perception in ordinary little things of life ("Cold Like Stone").

There are no fillers in "The Weight Of Man" every song is an indispensable step in the same path, and could be a stand-alone single. Every track is forged of attention to detail. It could seem a personal way of conceiving a "concept album", but you can also constantly weed every single tune out of its context, to get a new meaning and recognise life experiences in which to reflect. It's not a coincidence the cover of the album artwork expresses this feeling: you can see the shadow of a liquid man, two figures embracing, or everything you pretend to see in it in that particular moment, like we did as kids trying to give new identities to the clouds in the sky. That's exa-ctly what these songs are about: it's a lockdown photograph, but it's also an "old fa-shioned movie" and a look back from "few years from now". It's Ray's attentive eye, but it's the mood everyone felt in a lifetime. It's an intelligent denunciation and reflection of our difficult time (global warming, Brexit, pandemic, fake news, and fake social life), but mostly its confident injection of joy, hope and motivational boosts to let us remember how special and unique we are if we commit ourselves.

"The Weight Of Man" has also been a way to let the Ray Wilson fanbase be an in-dispensable part of the realisation: locked at home, and unable to perform, Ray came out with the great idea of his "Un-Tour" concerts. For the lockdown period, every two weeks, fans were able to buy a virtual ticket and participate online with some exclusive home concerts, where they also made personal song requests. In this way, from one side they had the opportunity to stay in contact with their idol and had so-mething special to watch and be entertained. On the other hand, they concretely con-tributed and supported the musicians and the recording process of the new album. As Ray sings to his audience in the moving "I, Like You": "Be as a friend, to me", and they did.

Collaborating again with the well-known Jethro Bodean, Scott Spence and Uwe Metzler's songwriting, and surrounded by state-of-art performers, including many loyal musicians (with the return behind the skins of his old Genesis/Cut_ eras friend Nir Z), with a refreshed and new inspirational approach both in visual works and communication by Luca 'Blukaos' Biondi, "The Weight Of Man" shows a never before heard Ray Wilson. An artist far away from today's 3 minute copy-and-paste songs and from a music business with too much emphasis on digital views and dys-tonic social matters, that rarely fit with the real concept of making music. A man releasing his new album almost in the 20th year since his first solo release, without regretting anything done or repeating it, but taking the best of every experience, ma-king his strongest effort ever. A singer showing new ways of using his unmistakable voice and performing talent, and using them to present something massive his fans would love, something new listeners will be fascinated by, something - at times - courageous that maybe could let someone remain fazed, but surely never indifferent.

"Learn to walk, before you run": Ray has walked an incredibly long path. Now, "The Weight Of Man" shows him running free, faster than ever before, in a precise career moment, where this level of creativity and the achieved 360° artistic control is obvious after so many albums and songs recorded. "The Weight Of Man" comes from a place where that doctrine (or need) sung in "Symptomatic" ("determination fused with new ideas") finds its transposition into reality: real life. And the world we use as a "backdrop theatre" for it. Where Ray reminds us exactly of what per-formers do: they create songs, they perform songs, they transform the gift of music into a joy for everyone, and mostly, they can't step away from taking the worst time of our lives and making our favourite track. Something that maybe will not change a reality we don't recognise anymore, but surely will grace us of new "golden slum-bers" to fill our lives. As The Beatles sung. As Ray encourage us to do, louder and more true than ever.