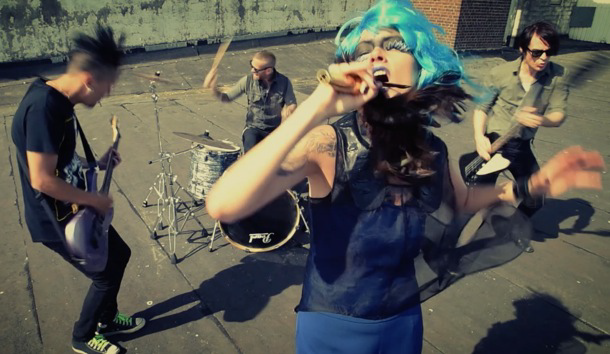 Alice in Videoland describe themselves as a combination of minimal 80's synth pop music with an upbeat electronic dance music (EDM) assault and a bitchy disco punk female singer.

Alice in Videoland was formed in 2002 by singer Toril Lindqvist and former band member Carl Lundgren. The band gained a massive response on their very first demo with the original idea, which they still try to adhere to, of combining edgy synth-basses, edm and electro with punk rock, and placing the edgy voice and melodies of Toril on top to create a unique style.

After six months of being on the 'demo market' the band were signed to the National label and recruited Anders Alexander (drums and synths) and Johan Dahlbom (bass). The recording of their debut album Maiden Voyage (2003) began. At the same time the band took the local club scene by storm with their energetic live shows.

Their second album Outrageous! was released in 2005 and by that time the band had gained an underground worldwide fan base. The single "Cut The Crap" opened up the US market for the band and a contract was signed with US label Storming The Base.

In 2008 Alice in Videoland returned to release their third album She's A Machine! which the band described as harder and edgier than their previous works.

In 2010 Alice In Videoland released their latest single "Spaceship" which became the band's first radio hit in Sweden and on November 2 the same year, they released their fourth album A Million Thoughts And They're All About You. The band also made their first video ("In A Band") in 5 years.

The records have been released in the USA, Canada and Europe and eight years of touring and over 400 gigs have resulted in devoted fan clubs all the way from Moscow to Los Angeles, millions of youtube -views, sold-out concerts in Russia, Belarus, Ukraine, Germany, Austria, the UK and the list goes on. The band reached one of its peaks when Mercedes Benz used their song "something new" in their TV-commercial that was broadcasted on Television and movietheatres all over Europe. ALICE IN VIDEOLAND where also played frequently back home in Sweden and became somewhat of a house band at the Arvika-festival where they shared the largest stage with bands like Depeche Mode, Kent and Kraftwerk.

In April 2015, after a nearly four-year hiatus, the band announced a reunion and the creation of their fifth studio album Forever and the single "Let Go" was released on Diket Records.